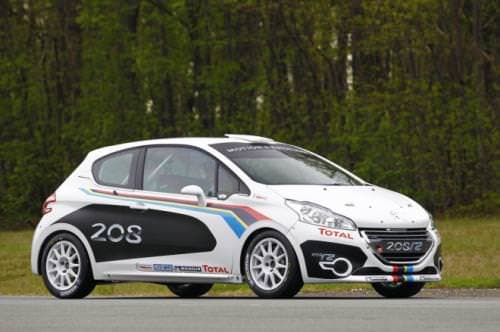 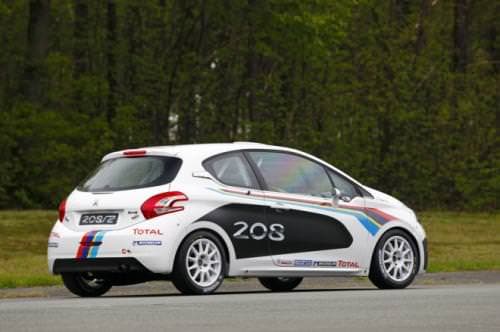 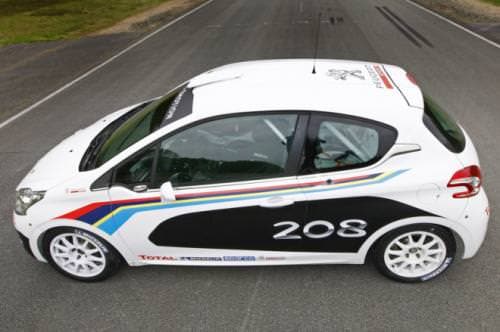 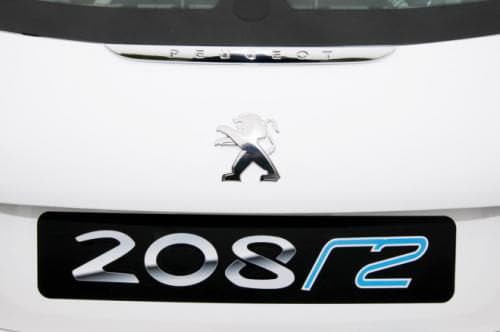 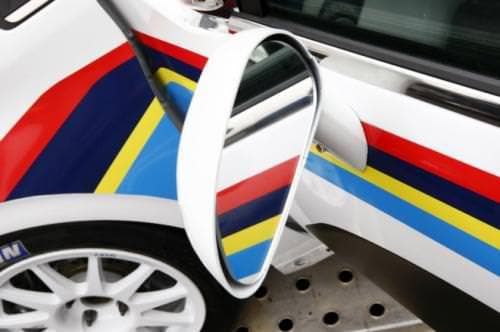 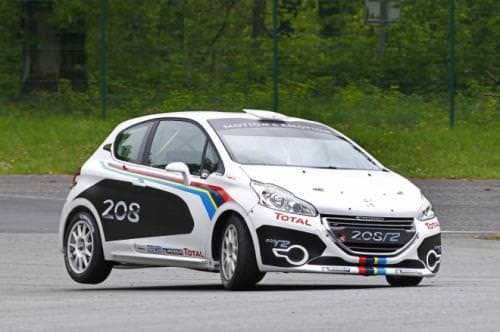 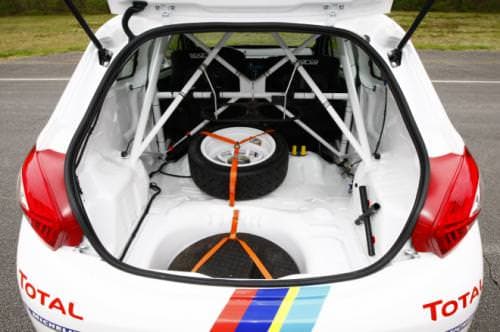 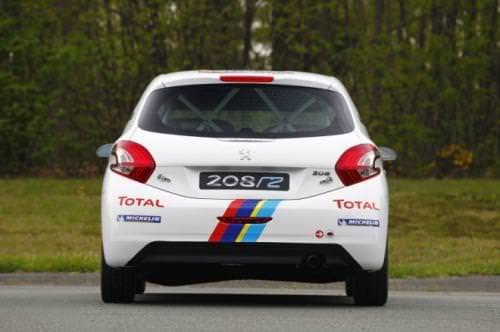 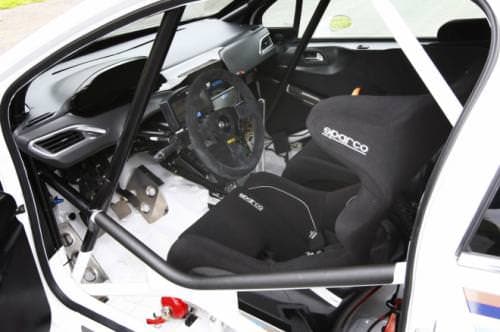 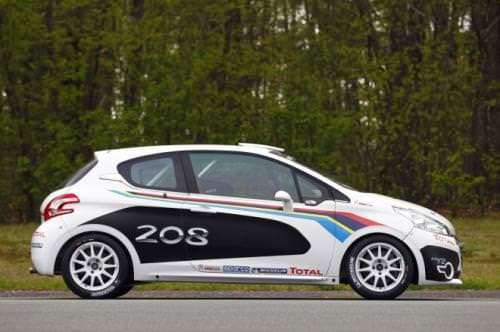 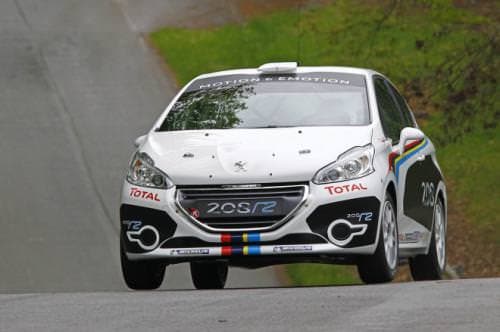 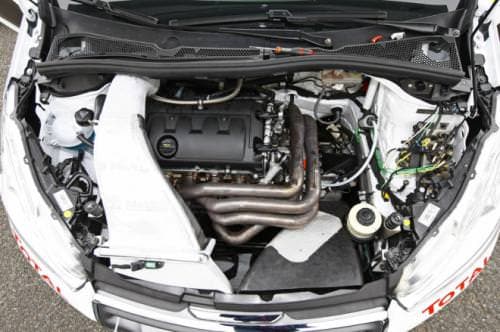 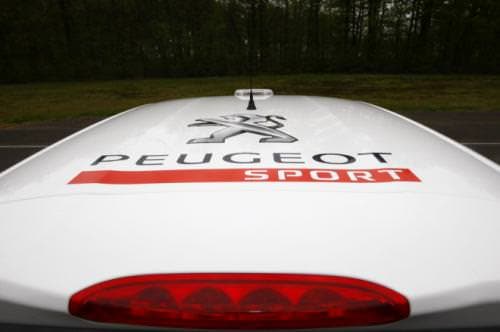 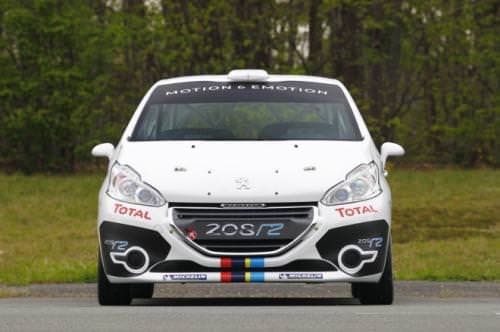 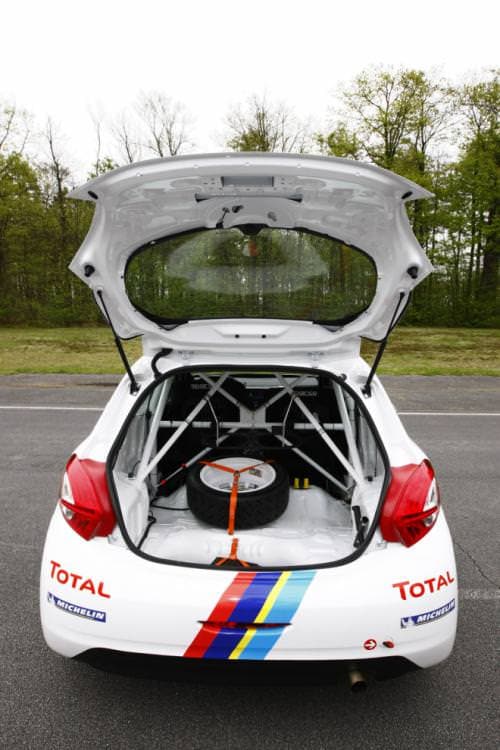 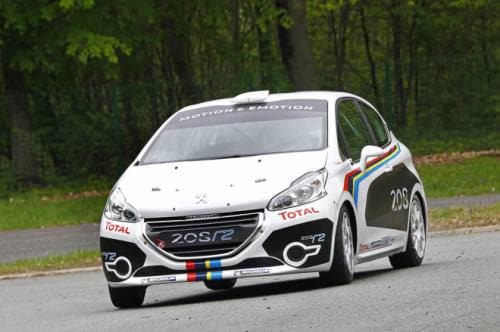 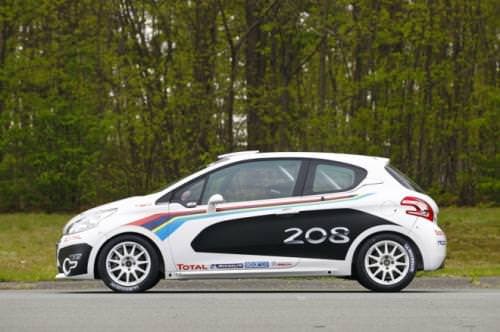 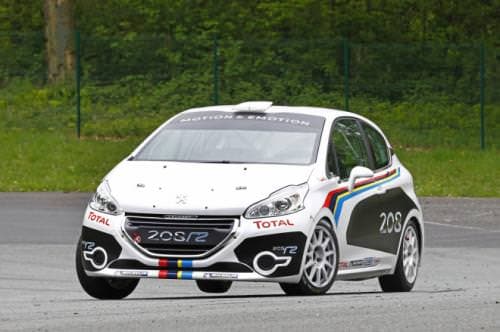 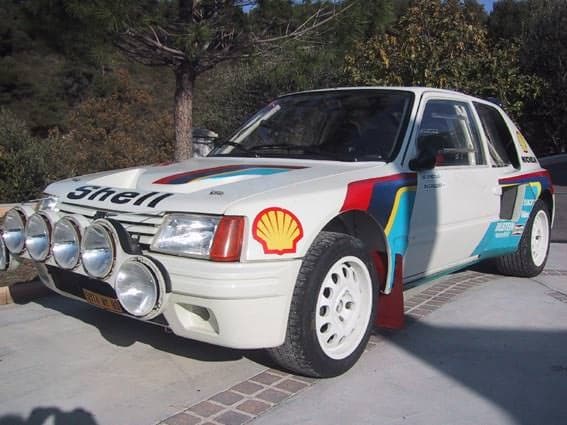 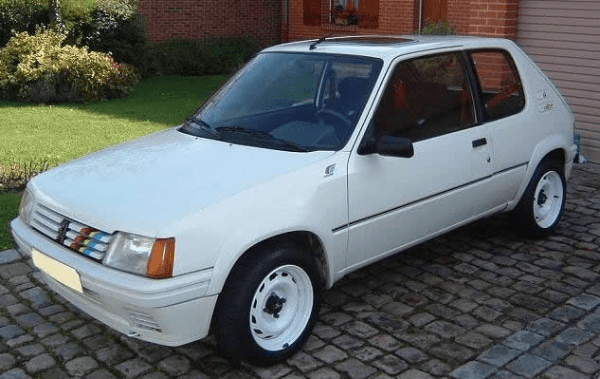 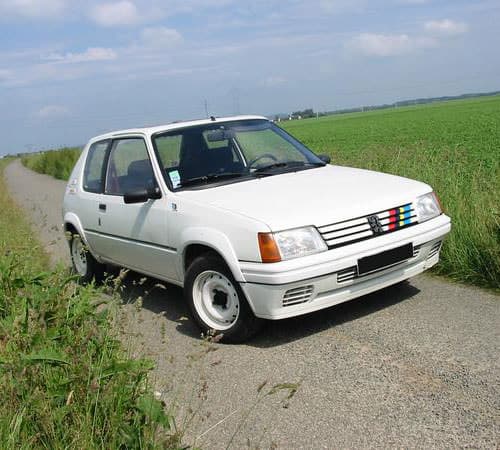 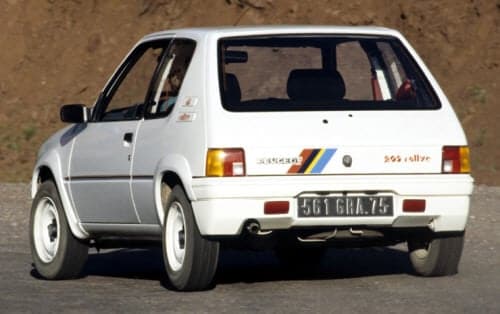 To follow and build on the successful achievements with the emblematic 205, 206, 207, Peugeot has applied its expertise, utilising the 'spirit of re-generation' that combines all of their best features to produce the Peugeot 208.

Peugeot Sport reveals the first of three 208-evolved competition cars, as the productioncar begins to go on sale across Europe.

The first competition version revealed is the 208 'R2' which will be campaigned as a 'zero'car on this month's Tour de Corse in the hands of Stéphane Sarrazin and BenjaminVeillas.

The Competition versions of the 208

Development of the competition versions of the Peugeot 208 has been in operation since the car was announced in 2011, and the first version to be released is the R2 which will provide a glimpse of its potential at next week's Tour de Corse (May 10-12) in France. Two other motor sport derivatives of the 208 will see the light of day before the end of 2012, beginning with the circuit version which features a specification very similar to that of the R2. The circuit version will be followed by the eagerly-awaited 208 which complies with the FIA's R5 regulations and which will go on to take over from the successful 207 Super 2000 rally car at national and international level. It is due to be unveiled in September.

Creation of an icon

"With the 208, Peugeot has given itself the means to create a new motoring icon," noted Peugeot's Range Director Laurent Blanchet at the model's launch. "The 208 carries over the successful spirit of the 205 and the 206, plus the functionality of the 207 in a thoroughly modern package," added Xavier Peugeot, the Brand's Product Director. Through the livery of the R2, Peugeot's stylists have sought to mark the launch of the 208's competition line-up by highlighting the model's emotional appeal and resolutely modern lines.

The 208 R2 will appear in this livery when it serves as 'zero' car for next week's Tour de Corse (May 10-12), the fourth round of the 2012 Intercontinental Rallye Challenge. Regular Peugeot Sport driver Stéphane Sarrazin and co-driver Benjamin Veillas will drive the hot hatch ahead of the field at the French event before staying on in Corsica for a week of testing after the rally.

208 R2: poised to become a new benchmark in a highly competitive market

The R2 is an indispensable part of the model line-up it is destined to spearhead. Affordable and competitive, it stands out as the ideal choice for those who want to get their first taste of rallying or simply enjoy their passion. The 208 R2 ran for the first time at the end of 2011 and is destined to replace the existing 207 RC Rallye not only as star of the Brand's 'Volant' single make series but also as a challenger for class success at national and international level. Ford, Renault and Citroën all have R2 cars, but Peugeot Sport has set itself the target of becoming the class's new benchmark in terms of both performance and low competing costs. Careful attention was also paid to reliability, notably with regard to its transmission, electrics and electronics. Another aim was to make life easier for owners by minimising the number of parts required to convert the car from gravel- to asphalt-spec, and vice-versa. This was made possible by using as many shared parts and assemblies as possible for the two versions and by benefiting from the PSA group's customer competition catalogue.

Through its compact forms, short overhangs and flowing transition between the bonnet and windscreen pillars, the 208 is a fresh interpretation of the Brand's styling cues, both in terms of their underlying principles and in the details.

The new signature front end is particularly charismatic, while its feline looks are more modern, status-enhancing and refined. It comes across as assertive yet lively, warm yet racy, hi-tech yet friendly, and natural yet sophisticated.

Lightweight:"The 208's bodyshell is approximately 40kg lighter than that of the 207. In addition, the 208's overall volumes are one of the R2's chief strengths, while its long wheelbase ensures excellent stability. Weight-saving work has enabled us to bring down the centre of gravity further, optimise where the weight is located and reduce the intrinsically low inertia of this car with its short overhangs. These features combine to provide the 208 R2 with outstanding road holding."

Modern structure: "The 208 R2's strengthened shell incorporates a multi-point, welded roll cage which marks a real step forward in terms of safety compared to rival roll cages thanks to a new manufacturing process."

Modern engine: To comply with the regulations, Peugeot Sport has developed for the 208 R2 a brand new, naturally-aspirated, 1600cc engine based on the 1.6 VTi available for certain versions of the 208 road car.

"For the competition version of this engine, we started from a clean sheet of paper and achieved the 185hp specified in the brief. At the same time, we succeeded in maintaining the low fuel consumption and CO2 emissions that are features of the original engine. This extremely modern powerplant comes with variable valve timing (VVT) for the intake and exhaust. The Group R regulations specify that the valves must be of the same size as those of the standard engine. Like its air intake dimensions, the 1.6 VTi's valves are smaller than those of the former 1.6 unit. The main factors which influence performance in the case of a normally-aspirated engine are its valves and intake, so we worked closely with Sodemo to make our new engine driver-friendly by focusing on flexibility rather than on peak power which often goes unused in rallying. We achieved this thanks to the use of VVT. The 208 R2 kits will be sold with the engine built, run-in and checked on the dyno."

Innovative gearbox: "The gearbox, too, is new. The 208 R2 is equipped with a five-speed, manual, sequential gearbox with the lever mounted on the steering column. The gearshift system is identical to that of the 207 S2000 and represents a significant evolution for a car of this class in which the original gearshift is more conventionally mounted on the floor. The lever is much shorter and also positioned higher, while the shift is more direct and precise because it is in line with the gearbox. The system is much more rigid since it is shorter and lighter. The gearbox itself features innovative cooling with an air duct at the front of the car which channels cooling air to fins built into the front part of the casing which help dissipate heat and cool the oil."

Reduced fuel consumption: The lower weight, carefully designed aerodynamics and naturally-aspirated engine have resulted in a significant fuel consumption saving compared to the 207 RC Rallye. This makes an appreciable contribution to keeping the costs of competing to a minimum.

Suspension performance: "We have carried over the proven three-way adjustable dampers, plus a new, bespoke adjustable hydraulic bump stop which has been developed specially in association with our supplier Öhlins. The R2 also features a specific wishbone arrangement which increases suspension travel. This, in turn, improves traction and is positive for the car's performance."

Hydraulic steering: "The 208 R2's steering is specific, too. We have switched from the standard car's electric power steering to a hydraulic system, combined with a higher-ratio hydraulic rack for greater precision and enhanced comfort in response to demand from the drivers. The use of a hydraulic system also permits more accurate feedback of information, notably on loose surfaces."

Single calliper brakes: "The diameter of the brake discs is dictated by the regulations. As wear parts, they need to be effective and reliable, but also relatively economical. To simplify the ordering and management of parts and to facilitate the conversion from gravel- to asphalt-spec (and vice-versa), we have opted for a single Alcon calliper plus standard, re-machined discs. Thanks to the floating calliper arrangement, the conversion from gravel- to asphalt-spec only requires the calliper mount to be changed."

Clutch:the 184mm-diameter single clutch plate arrangement is dictated by the regulations. Peugeot Sport specifies an Alcon plate for the R2.

Wheels:the wheels are also covered by strict regulations regarding their width, diameter and weight.

The 208 represents a new generation of car, while Peugeot Sport has collaborated with PSA group experts to make the necessary modifications for motor sport use in compliance with the regulations. "Throughout the process, we worked closely with the group's different technical departments," says Alexis Avril, Customer Competition Manager. "At the beginning of a project like this, in-house skills and expertise allow you to make swifter progress when developing certain advanced solutions. The 208 R2's transmission, for example, is made entirely by PSA to a brief drawn up especially for competition purposes. We also benefited from the savoir-faire and experience of the Brand's series production experts in fields like materials, surface treatment and processes. The 208 features a new, modern powertrain, so we spent a great deal of time with the firm's specialists during the 208 R2's different development phases. Last but not least, as a function of the regulations and in order to minimise costs, we called frequently on our colleagues to source the most suitable parts from the catalogue of the series production version."